Some may say that mothers have the hardest job in the world or are super human, but I say it’s more than that.  Mothers are like a whole team of superheroes!  Much like the Avengers, mothers are heroes for many different reasons.  Don’t believe me?  Let me show you how…

Tony Stark, billionaire genius who has an iron suit that he can pretty much do anything with.  Sound like a mommellah?  I didn’t think so.  But you know what Tony Stark’s real super power is?  Always knowing the best possible course of action and executing it swiftly.  Now that sounds familiar, right?  All moms know their kids signals and know if it’s time to play, eat, sleep or pull off some Harry Houdini roadside diaper change and how best to make it happen.  Mommellah’s are super powered CEOs for sure!

Captain America, the “physically perfect human”.  Although most moms have something they dislike about their bodies, it’s only because we are harder on ourselves than we should be.  We MADE A HUMAN.  That’s a big frickin’ deal and our bodies are perfect.  Perfect baby making machines!

So, maybe our kids are more likely to Hulk smash things than we are, but ALL moms have had their Dr Banner to Hulk moments.  A good example of one of those moments; a friend’s kid was trying to be helpful by washing mommy’s car… With rocks!!!  Let’s just say a Hulk moment for a mom can occur anytime, over anything.  It all depends on her hours of sleep, depth of patience and how much money it will set the family back.  Mommy *smash*

Did you know that along with thunder and lightning, Thor is also the g-d associated with the protection of mankind, healing and fertility?  Mothers are all about fertility, healing and protection (and occasionally thunder and lightning).  Whether you have a crazy family member (like Loki) or are just protecting your bubbellahs from everyday hazards, everyone fears the wrath of Mommellah’s hammer.

Super sexy fighting machine with gifted tactical abilities?!  Sounds like mothers all over the world to me.  She can mask her emotions and has an “uncanny affinity for psychological manipulation”.  No one does this as well as a Mommellah.  We all have to train our kids not to embarrass themselves in public with a straight face, using the most effective strategy.  And guilt trips?  The Black Widow ain’t got nothing on us.

Hawkeye.  The last of our Avengers team.  Alas, he has no superpowers, but being raised in a circus gave him ample time to perfect his aim and combat skills.  I’m sure many mommellahs out there can commiserate with being raised in a circus and how that level of some constant chaos prepares us for motherhood.  Because ladies, life is a circus, and we are the ring leaders.

It goes to show, mothers are the Avengers: Saving the world, one baby at a time! 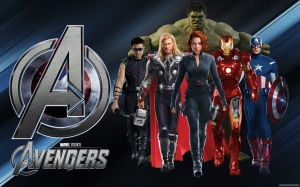